Stand and Deliver! • The CORE Institute
Skip to content

As part of the Henry Ford Collection in Michigan, Greenfield Village immerses visitors in America’s long history of innovation and progress. At the 80-acre campus, you’ll see working Model T’s, steam-powered locomotives, the Wright Brothers’ home and bicycle shop, along with collections of houses from the 1600s on up to the early 20th century. Plus, on any given day, you’ll likely meet one of the site’s master presenters, Ron Kozdron.

Kozdron, 66, is a history buff who has worked at Greenfield Village for over a decade, educating thousands of guests as a craftsman/lecturer in the old tin shop. He also plays Santa at Christmas time and a Halloween ringmaster who dances and sings in the streets in October.

“I love history because you get to see how things started,” Kozdron said. “Some people love to go to sporting events, although in my free time, I always took the kids to visit museums.”

That made Ron a natural to lead countless tours of the Village, but then two bad knees halted him in his tracks.

Kozdron’s job involves standing on his feet for long stretches throughout the day. About a year-and-a-half ago, he developed tremendous pain in both knees. Ron took daily pain medication just to endure the walk from the parking lot to the tin shop. He could barely make it, and could no longer ride a bike or work in his garden. Even lifting his legs to get into his car was a challenge.

“When you hurt that bad, it affects your life, your personality. You can even be gruff, sometimes,” he said.

Kozdron’s knees had simply deteriorated through the years and after his primary care physician referred him to Dr. David Markel, a hip and knee surgeon at The CORE Institute, Kozdron learned he was a candidate for knee replacement. He would need both knees replaced, and surgeries were scheduled for early 2019: one operation in January, then another for the second knee in March.

“People start to notice that there are things they can’t do and they’re unhappy, and there’s no reason to have to be unhappy,” Dr. Markel said after meeting his new patient.

A new lease on life

Dr. Markel utilized the MakoTM Robotic-Arm Assisted Total Knee Replacement for Ron, and after each surgery, Kozdron spent about three to four weeks rehabilitating the new knee replacement. Doctors encourage patients to move as much as possible after a knee replacement.

“Pain was almost immediately minimized,” Kozdron said, and that was enough motivation to keep moving every day. Today, with both knees replaced, the master presenter enjoys a new lease on life.

“My job involves a lot of walking around, and now I can do it all day,” he said. “My biggest worry was not being able to kneel to work in my garden. Dr. Markel said I could keep working on that during rehab, little by little — now I put down a pad, and I can do it. I’m riding my bike again, too.”

“To see someone after that, walking independently, not taking pain medicine, being really happy, to give somebody that is really gratifying, I really love it,” Dr. Markel added.

Kozdron and his wife also recently opened their home to an energetic puppy. “I can’t run too far, but I can get down there and play, no problem,” Kozdron added.

Back in the Saddle 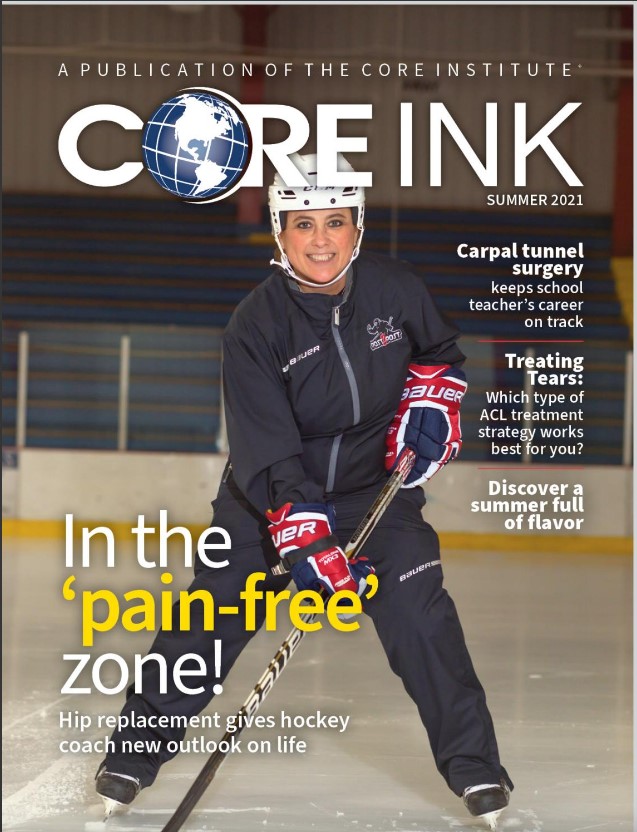