Born to Ride • The CORE Institute
Skip to content

You don’t need to spend too much time with Mike to pick up on his love of motorcycles. He owns six of them and has plenty of stories to share about rides across the U.S., through the European Alps, South America, Asia and even the Middle East.

A few years ago, however, the 55-year-old professional tool maker started to feel tightness in his right hip while riding his motorcycle. Assuming it was a hip flexor issue, he incorporated stretches into his daily routine to try to loosen it up.

“It was a sudden pain, and it just kept coming back more and more frequently,” he recalled.
Over time, the thrill of riding dwindled, he started to gain weight from the lack of activity, and pain put the brakes on his life joys.

“It absolutely blindsided me. In the space of about a year-and-a-half to two years, it debilitated me,” he said.

Finding a way
Suspecting he might need a hip replacement, Mike wanted the best experts for his situation. Then, on one of his motorcycle outings, he met a fellow rider who recently had hip replacement surgery at The CORE Institute.

“She said, ‘I love that place. That’s where you should go. The doctors are great,’” Mike recalled. “I had driven by their offices a bunch of times over the years and never thought of it.”
He booked an appointment with Robert Cercek, MD, a Fellowship Trained Hip and Knee Surgeon at The CORE Institute. Dr. Cercek quickly noticed eroded cartilage and advanced arthritis on Mike’s X-rays.

Mike immediately felt comfortable with Dr. Cercek. “He took the time to listen to me and he told me what he saw and what we needed to do. I clicked with him right away,” Mike said. “As soon as I walked out, I knew this was the guy for the job.”

“My first impression was this was someone who really wanted to get back on his feet and become fully independent again. I knew we could help him do that,” Dr. Cercek added.

“The technology and the durability of the implants has improved so much throughout the years,” Dr. Cercek noted. “That durability is what allows us to do surgeries on younger, more active patients like him. It used to be that you’d have to replace a hip again in 10 or 15 years, but performed properly, it should last forever.”

Positive attitude
At home, Mike was eager to make progress. He started walking around the house, then to the street corner and beyond. He started riding his bicycle, too.

“I’m not a cyclist. It’s more of a recreational thing for me, but I went from riding to the corner and back to riding 20 to 30 miles,” he said. “I lost 45 pounds since the time I first stepped into The CORE Institute.”

Dr. Cercek says aging adults sometimes aren’t sure if their pain comes from the hip or back, making it difficult to understand if they have an arthritic hip. So, they may endure pain unnecessarily for years.

“If you notice pain in the groin area or you have difficulty reaching your feet and putting on shoes and socks, it may be hip arthritis and it might be time for an evaluation,” he said. “We find that within six to eight weeks most people forget they even had a joint replaced. These surgeries help a lot of patients get back to living life.” 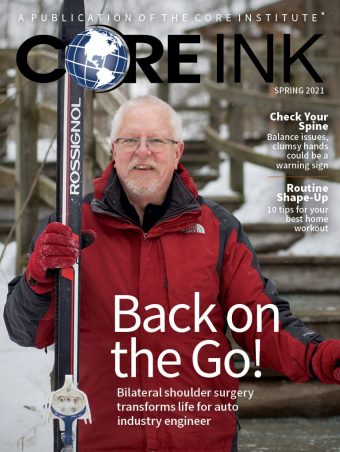 We are now offering COVID-19 vaccines in many of our Arizona offices. Click here to sign up.
+